ILEs in a senior secondary setting

What happens when a senior school environment steeped in traditional learning practices and pressured by expectations of the profession and community builds an ILE to house the entire English program?  A guest post by Dr Scott Alterator,La Trobe University explains …

My team and I investigated a senior school setting in regional Victoria as it commenced occupation of a once traditional ground floor tech wing renovated into a mixture of open, large, operable glass-walled, ‘irregular’ learning spaces capable of accommodating nine classes at any given time. 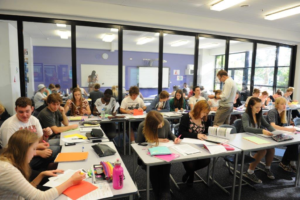 Irregular teaching space at senior level. While teaching still occurs in more traditional modes there is scope for teachers to interact and collaborate, during classes with ideas exchanged through the glass walls or in more formal arrangements where classes are combined to facilitate innovations like differentiated and targeted learning. Despite high levels of positivity in response to the possibilities of the spaces it was also reported that the exposure can lead to a feeling of isolation.

The senior school setting employing an ILE presents a complex situation of competing forces that conspire to generate an inherent tension. The school is necessarily committed to externally administered exams, a formal assessment schedule, a focus on final results and achieving university placements. At the same time students have experienced junior years schooling that is responding to the affordances of ILEs with increasing degrees of enthusiasm impacting student learning. The mix of professional and societal messages makes for an incoherent whole. Still, recognising the need for change, the school undertook a significant revamp of their Year 11 English program.

In short, the program was altered to maximise synchronicity. The same subjects engaged in the same material at the same time in the same place. Teachers prepared and marked work in teams that reinforced the opportunity for collaboration and were for the most part located in offices positioned adjacent to the classrooms. This development was provided by the ILE. Such a system was not possible nor sought prior to the construction of the new building.

The research employed a case study approach that provided a rich or deep understanding of the context. Through interviews, classroom observations and school organisational frameworks we developed insights into the affordances in the senior school setting.

We found that the affordances of the space occurred in a two phases. The first is seen in the school-level response in organising the English program. The second set of affordances were created by both the brute space and the embedded structure. 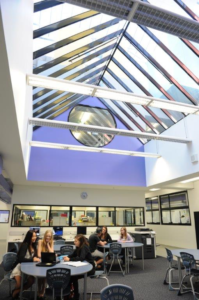 Internal breakout zone. A highly visible quadrangle styled space sits adjacent to teaching spaces and staff rooms. Students assume a high degree of agency over the physical layout. It is a very popular zone in the mornings and during exams. It is a loud space but this is actively managed.

Flexibility and control: a counter-intuition

The tightly aligned curriculum program represents the organisational response to the affordances of the ILE. The activation of these affordances runs counter to the broader narrative of learning spaces as flexible. (I won’t bemoan the limits of metaphors here). Still, schools are nothing if not a series of complex systems offering constraints and possibilities. The research indicated a strong interrelation between the initial and secondary set of affordances. The occupation of the ILE meant the school based system entered a relationship of reflexivity and interdependence with the teachers (expressed through practice).

The response by the teachers is necessarily one of adaptation. Practice changed and altered in the new spaces in concert with the school imposed system. The school was bound by administrative and social restrictions and developed a system in response. This, in turn, shaped a set of affordances combining the system and the brute space. Teacher responses were generally positive with an overarching narrative of freedom and spontaneity juxtaposed with accountability and pressure. A degree of innovative practice had emerged at this early stage although this is contestable and must be viewed through the set of pressures acting on senior settings.