See what you learn when you (can) listen! 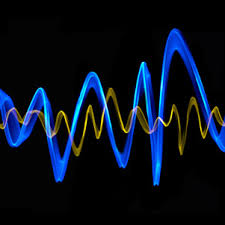 A few weeks ago we published a blog by Colin Campbell on his experience of presenting during a visit to the University of Melbourne.Here A/Prof. Wesley Imms tells what he learnt from Colin’s presentation and experience…

Colin and I met a couple of days before he was scheduled to give an acoustics presentation in the MGSE. I had booked two venues, and we had to decide which to use.

I knew it would be a popular event. Colin knows his business. He works for a Ecophon, a European acoustics company and ILETC project partner. Based in Sweden, Colin advises on acoustic treatment of classroom spaces to dozens of school builds across Europe. 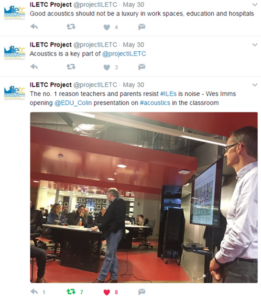 And his extensive knowledge should directly inform a topical point with teachers. Teachers always talk about ‘noise’. “The room is great, but where’s the point if the kids can’t hear me talk”, they would say. Or, “These are supposed to be environments that foster collaborative learning, but they are so noisy the kids can’t hear themselves think”. It’s a real problem. Some modern learning environments have been designed with acoustics a far-distant afterthought. Colin knows this issue inside out.

Being in town, I’d asked Colin if he would mind giving a public presentation while he was here (rapidly accepted) as one aspect of his work is to help teachers better understand acoustics. Our meeting was to decide which of the two venues he should use.

The first choice was a typical 120-seat lecture theatre, purpose-designed for an event such as this but its ‘stand and deliver’ design was at odds with teacher-student, and student-student dialogue. The second venue was a semi-detached casual work area directly opposite that shrine of Melbourne existence, the coffee café. The renovation architects told me it was designed as ‘an informal teaching space’. He showed me the spot designed for a data projector, and the blank wall intended to act as a screen. The design intention, he said, was to allow for visible learning to take place. It had half a dozen plectrum tables and perforated metal screens separating it from the (often busy) café next door.

The second venue was difficult to pass up. As happens in schools so often now, the designers had designated this as a place for instruction, where you could engage students in learning while passers-by drop in, or stand by and listen, engaging informally. A marvellous concept, so let’s use it! But, I admitted to Colin, in eight years I had never seen the space used by a single MGSE staff member.

The session was a disaster.

We had about 20 attendees who sat facing a mobile display. Colin stood close to the group to speak. Some attendees stood in the outside area listening through gaps in the screens that were designed for exactly that use.

It was not a busy day on that floor – rather light, in fact. But no one could hear Colin. Noise from the café bounced around our area, the voices of people passing by intruded, the sound system in the communal area added to the audio slurry. Colin pushed on bravely, but began to falter. He lost his way a couple of times, lost his timing. People were shuffling forward, the atmosphere was becoming more and more tense. People began to grumble, then complain. No-one left (what we could catch from Colin was exactly what we wanted to know), but the annoyance of not being able to listen and learn was palatable.

I finally called it a day and we moved to the tiered lecture hall, faced the screen and felt a comfortable familiarity sweep over us – now we could listen and learn.

From that stage on, it was a marvellous session.

What did I learn? Colin’s blog from that day and his generous sharing of the PPT gives a summary of what we covered. But my take home was:
• Acoustics is not a mystery or a chance thing – its science is clear.
• It is about two main things (all a teacher needs to know).
• The first is reverberation – sound bouncing off surfaces as it (eventually) travels to your ear. There is good reverberation, and poor reverberation. Some is needed, but too much (bouncing from far distances, or off a number of surfaces) confuses us.
• The second is decibel levels. These can easily be measured, and spaces adapted to reduce it if needed. A teacher needs to speak at about 15 decibels above the ambient level to be heard. Ambient decibel levels tend to increase as people start speaking more loudly to be heard above other people speaking.
• It is all manageable! Good acoustics can be achieved if the designers adhere to some basic principles, and if the users of a space are happy to adjust their practices (much the same as they would if a space became too cold).
• Acoustics need to be included in the early planning stage of a new space. Some simple mechanical devices (a bookcase at the rear of a room with 2.8m ceilings, for example, or off set doors between classrooms) can make the world of difference. It is that simple.

What did I learn about the actual presentation?
• No teachers turned up. It was a well-advertised session, being held in one of the most convenient spaces in an Education Faculty that prizes itself to be in the top ten in the world. But no faculty members came, and not one teacher trainee student was there.
• The attendees were mainly designers, which was brilliant. They took time away from their practices to hear Colin. There was an irony in the fact that their colleagues, in hundreds of builds around the world, were the people labelling spaces such as these ‘informal teaching areas’. There was a degree of ‘ah ha’ in the group, as they experienced first-hand (as eager learners) what teachers are given to work with by some overly-ambitious designers.